Perfect night below the milky way 🙂 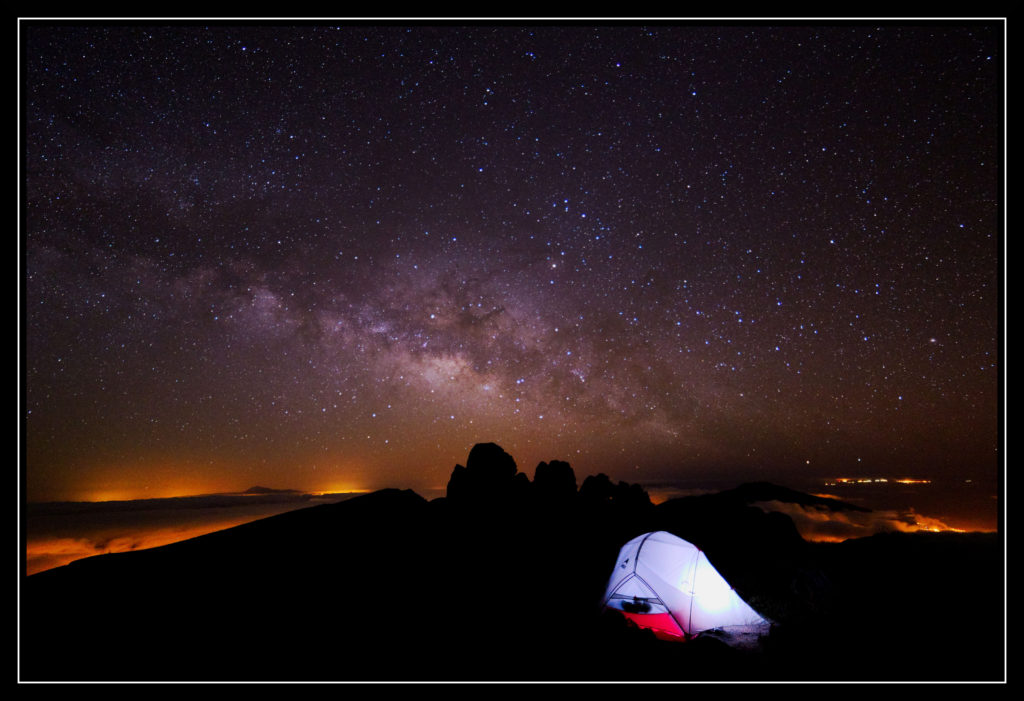 Today was the last night on La Palma! It was clear sky and so we spent the night at Tacande Observatory!
We were able to look through the telescope and take pictures of stars, nebulae and comet catalina! 🙂

Today we visited a friend in Tinizara. Together we walked the Ruta de Las Fuentes. This hiking path passes some sources, but they were all dry this time. We saw many almond trees on our way 🙂 It was also the weekend of the almond festival in Puntagorda. After the hike we went to the mercadillo and bought some fresh food.

Today Carsten went to Santa Cruz and from there to Roque de los Muchachos and back. But I didn't want to sit in the car for so many hours, so I decided to go cycling again. I went to Los Llanos and from there up to Barros. There starts the road that goes down to the car park inside the caldera. For about three kilometres I biked down in many turns... slowly.. because three years ago I had a crash there.. There were some cars at the car park. It is the starting point for a walk inside the caldera to the coloured waterfall and the camping site. But I cycled upwards, for about 15 kilometres, until I reach the mirador Los Brecitos. Here the view is again very beautiful with a mix of clouds and sunshine. I met another biker and we stayed at a nice place above the car park for some time. From there I saw Los Llanos and Todoque where it was raining! When I cycled back down to the car bike there was a perfect rainbow inside the caldera. It looked so beautiful I had to stop several times! 🙂 Back at the car park I had to cycle up again three kilometres before being back in Los Llanos, that was really hard after the long break, but still this way was worth every kilometre 🙂

Today I decided to go cycling for a few hours. I started in Todoque and cycled up to the visitors center. From El Paso on there was such a storm! And the wind came from the front so cycling was really hard. There were also many clouds above the cumbre and it looked like rain... but nevertheless I continued. At the visitors center I turned to the road that leads to the Cumbrecita. To drive on this road by car you need a permit that can be obtained on the Internet or in the visitors center! There is a parking space at the end of the road, but it is only for 16 cars, so traffic on this road is limited and most people take a taxi. I cycled up the road for about 8km before reaching the car park. From there I continued for one kilometre until I reach the mirador de las chozas! This is a nice place with a view inside the caldera! I was completely alone there and stayed for about one hour before going back. This place is also a good starting point to go hiking inside the caldera.

Hi, my name is Carsten. As long as I can remember I like nature in all its forms and colours. I like hiking, cycling and travelling all over the world. Furthermore I am interested in photography. Here I want to share my interests and experiences with you.

Hi, I am Lisa! I love being outside! In the summer I like to spend most of my time hiking in the Alps or cycling. In the winter the best place for me are the Canary Islands with their amazing landscape and perfect climate.